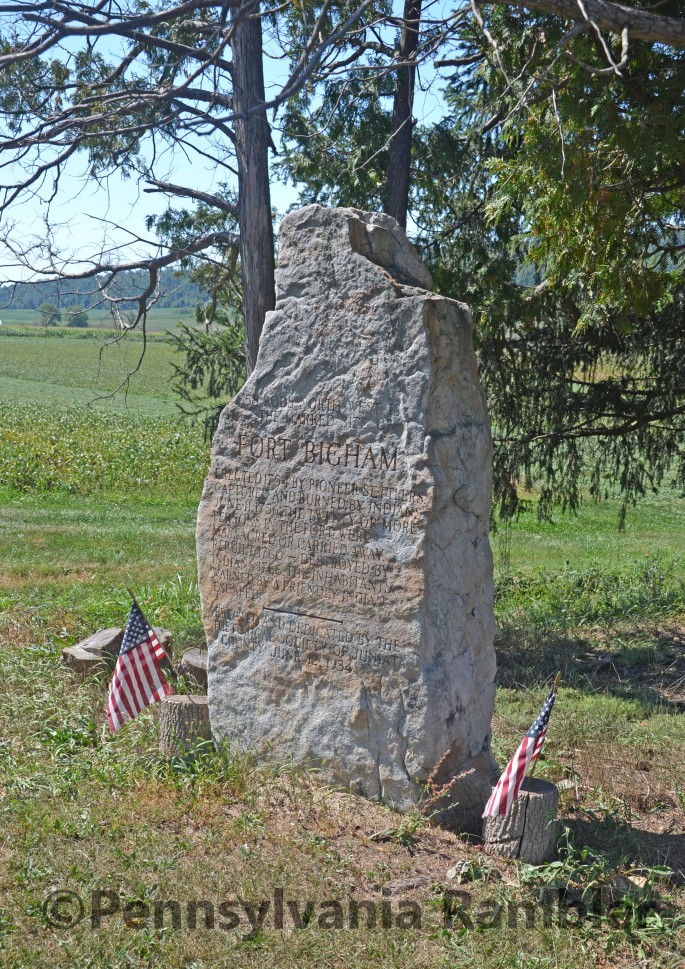 Glancing at the odometer, I knew something was definitely not right – five miles had passed five miles ago and the monument was not in sight.

I had already made a stop at the familiar blue Pennsylvania Historical Marker located at the junction of Route 75 and State Route 3002, which is also known ad the William Penn Highway and old Route 322, just east of Port Royal. While the state historical marker fascinated me, I turned my attention westward to the place where the fort once stood while the region was still America’s frontier.

Almost fourteen miles west of the blue historical marker, a couple miles east of the community of Honey Grove, the stone memorial came into view.

I parked at the end of a farm lane next to the marker, careful not to block the drive,  and got out, pausing to admire the beauty of the rolling farmlands of the Tuscarora Valley. Placed in 1934, the marker for Fort Bigham, which is also referred to as the Fort at Tuscarora and Bingham’s Fort in some of the early records , stands among  a small cluster of pines at the junction of Route 7 and the farm lane..

In the grand scheme of Pennsylvania’s history, the block house and small stockade should have been easily been forgotten. Samuel Bigham erected the blockhouse on his land with the help of his neighbors John and James Gray, and Robert Hoag, who is also recorded as Hogg in some accounts. The fort was erected along the Tuscarora Path that ran the length of the valley. The exact year they erected the fort is not known, but most sources state it was built in 1754, although in a handful of places it is recorded the fort existed as early as 1749.

Note: I’ve read that the fort was also located along the Trader’s Path, which is a path that I cannot seem to connect with the valley though it appears in a number of sources. There are two possibilities of the name. First, it was an alternate name for the Tuscarora Path. A second theory is this path was one used by settlers to travel over the mountains to Carlisle for supplies. It appears the northern end of this route used by settlers terminated near the location of Fort Bigham. This would be the same path that John Gray and Francis Innis were traveling along on the day the fort was burned.

On the morning of June 11, 1756, John Gray and Francis Innis were returning to their homes in the Tuscarora Valley after going to Carlisle for salt. As they were descending the Tuscarora Mountain, John Gray’s horse spooked when a bear crossed their path, throwing John from the saddle before running off. While John tried to recapture and calm his horse, Francis Innis, eager to see his wife, continued on without waiting for John.

After two hours of searching for his horse, John was finally on his way home. His bad luck was the only thing that saved John’s life that day as King Beaver, the Delaware chief, raided the Lower Juniata and Tuscarora Valleys that morning. John had to have seen the smoke filling the sky as he approached the fort. By the time he arrived there, the last of the fort had been consumed by fire.

John searched the remnants of the fort to see if any of the remains were those of his family. He would discover that his family was not among the dead, but his wife Hannah and daughter Jane, who was three at the time, were taken captive. Nor did John discover his friend Francis or his family. There were twenty-two people killed or taken captive during the raid.

Note: George would later help lay out Pittsburgh in 1784 – Wood Street was named in his honor.

The home of Alexander McAllister was burned and his cattle and horses were driven off. What happened to the couple remains a mystery – Alexander and his wife were listed among the missing.

Francis Innis and his wife were sold to the French and taken to Montreal. On the way northward in the December of 1756, the youngest of their three children became sick. The captors taking them to Canada broke a hole in the ice of a river and pushed the child under. While prisoners in Montreal another child, James, was born. Francis and his wife were released by the French and returned to their home in the Juniata Valley. Their children remained among the Indians until the autumn of 1764 when they were returned home to their parents.

Hannah Gray was captured and despite her husband’s attempts to recover her, she was not able to return home until nearly four years after her abduction. John would march to Kittanning with the Armstrong Expedition, but would fail to find his wife or daughter there. By the time Hannah had managed to return home, he had already died – some say it was from a broken heart.

At the end of Pontiac’s War, she hoped her missing daughter, Jane, would be among the children returned; however, her daughter never returned home. The fate of Jane Gray is a mystery to this day. She may have died among the Indians, died on the journey home, or remained with the Indian family that raised her.

When the children were returned by Colonel Bouquet, Hannah searched among the children, and not finding her daughter, took a girl who was about her daughter’s age — a child no one else would claim her as their own. Hannah’s good intentions and actions resulted in one of the most famous property cases in early America and possibly history. The court case was Frederick et al. versus Gray or, as it is more commonly known, The Gray Property Case.

John’s will left half of the farm to Hannah and half to Jane if she ever returned from the wilds. If there was no heir, then the estate went to John’s sister. In 1789, the heirs of John’s sister went to court to claim John’s farm, which covered between three and four hundred acres of prime farmland in the Juniata Valley. For more than fifty years the sister’s heirs and the adopted captive’s heirs fought over the land until the courts finally decided to rule in favor of the sister’s heirs.

Fort Bigham would be rebuilt in 1760 and named Fort Bingham. It would be attacked and destroyed again a few years later.

Note: All sources I’ve found state that the fort was destroyed for the second time in 1763, but for some reason the marker at the site states it happened in 1766, which I believe is a wrong date.

One thought on “Fort Bigham”