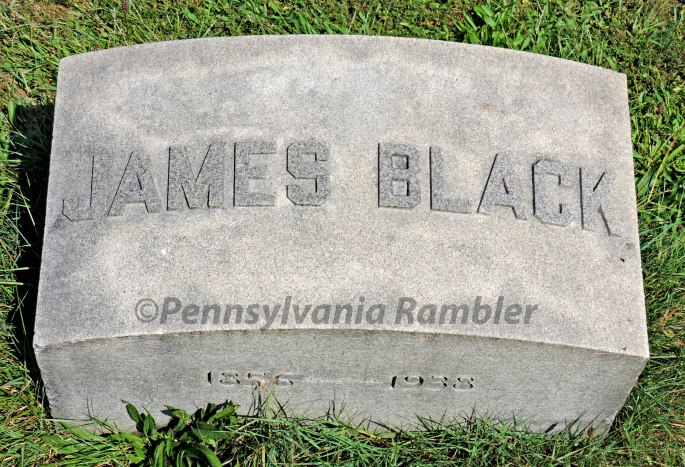 We all have our favorite song (or songs) that we find ourselves singing for no apparent reason as we go about our daily routine. I know that I have a number of songs that I find myself singing, whistling, or humming depending upon the situation. One of my favorites is an old hymn that I was introduced to as a young child, When the Roll is Called up Yonder.

The old hymn was the motivation behind my arrival at the Wildwood Cemetery in Williamsport. Finding any grave within the cemetery grounds is nearly impossible without help. I stopped at the office and asked for help in finding where the hymn writer was buried. To my surprise and delight, James Black, the composer of When the Roll is Called up Yonder is buried next to his wife on the small hill immediately behind the cemetery office. His small stone is very simple with just his name and the years of his birth and death on it. Nothing about his memorial hints at his life as a noted songwriter.

Little is known about James’ early life, but it is known that he was born August 19, 1856 in South Hill, New York, a community just south of Ithaca. Black became a traveling teacher, giving music lessons to people living in northwestern Pennsylvania. While in Titusville, he met Lizzie Fulmer; they married and moved to Princeton, Indiana, where Black took the position of a school teacher. In 1889 Lizzie passed due to the effects of a heart attack she suffered the year before. James returned to Williamsport and remarried Elizabeth Updegraff, who passed in 1921. He would remarry a third time, this time to Lucy Levan.

Black found his calling within the Methodist Episcopal Church where he worked with children and youth, taught Sunday School, and was the church song leader. Outside of his church activities, we taught music during the week, composed hymns, and edited hymnals.

Black’s most recognized hymn, When the Roll is Called up Yonder, has a catchy, upbeat melody but is based on a sad event in James’ life.

James would often walk the streets of Williamsport, seeking inspiration for his songs and also seeking out young people to encourage them to attend Sunday School. On one of these journeys he met a young girl he would later identify as Bessie. The young girl was sitting on the porch of a rundown house wearing ragged clothes and torn shoes. Bessie’s father was a drunkard and her mother washed clothes to make ends meet, so the young girl had very little in the way of new things.

James invited Bessie to attend the Sunday School. Bessie replied that she wanted to attend, but she had no clothes fit to be worn to church. James bought her a new dress, shoes and a hat and had them delivered to her house. The following week James invited her again and Bessie started attending.

Bessie attended services regularly but one Sunday when the secretary was taking roll Bessie failed to respond. Her name was called a second time but there was still no response. James, thinking she was daydreaming, stood and called her name for a third time, but for the first time since she started to attend the Sunday School Bessie was absent. James would later say that at that exact moment, he had a vision. What if on the Day of Judgment, when our name was called from the Lamb’s Book of Life, we failed to answer when our name was called?

A very concerned James left church that day and headed immediately to Bessie’s house to see why she was absent. He discovered that she was gravely ill with pneumonia and sadly she was standing at death’s door.

James returned to his home and searched through his hymnals trying to find a song about a heavenly roll call, but failed to find one. With the thought of a final roll call on his mind, James sat down at his piano and in minutes had written the lyrics and music for When the Roll in Called up Yonder. A few days later James sang his song for the first time at Bessie’s funeral, the girl who had inspired the hymn when she was absent at roll call.

While James wrote other hymns, none ever gained the popularity as his tribute to Bessie. And on December 21, 1938 James answered his final roll call when he passed from this life.

Note: Over the years, the girl has been given the name Bessie, though in the earliest references I could find, she is only identified as “the young girl.” The true identity of the girl has yet to be and possibly never will be revealed.