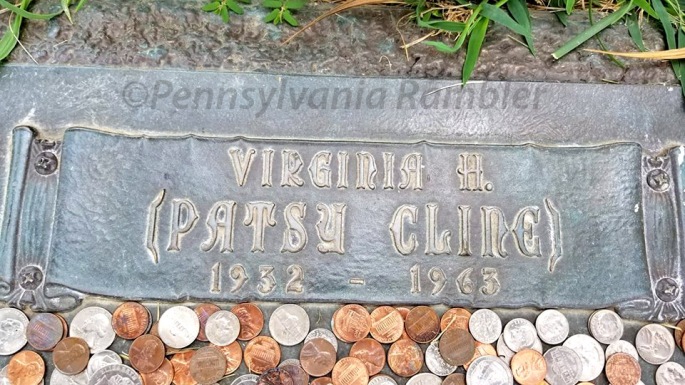 I arrived at the Shenandoah Memorial Cemetery, situated south of Winchester, Virginia along the Front Royal Pike, as fog was beginning to settle on the landscape. Stepping out of the vehicle, I opened my notebook and was in the process of reading the information for the grave I sought when a car pulled up next to me. The driver lowered the passenger’s side window and called out: “You looking for Patsy?”

“She’s about six stones back and a couple in,” he announced as he pointed with his thumb over his shoulder. Without saying anything else, he put up the window and drove off, leaving me to wonder how close he was with his directions. A couple seconds later I had to admit he definitely knew what he was talking about. Resting next to her second husband Charles Dick is Virginia, better known to the world as Patsy Cline, one of the most successful and inspirational country stars.

On September 8, 1932, Patsy was born Virginia Patterson Hensley in Winchester, Virginia, the first of three children to Hilda and Samuel Hensley. By 1947 she was singing on a variety of regional radio shows and in local clubs. In 1953, she married Gerald Cline and the couple divorced in 1957, but she retained his last name as part of her stage name. It was at the encouragement of her second manager that she use the stage name of Patsy – from her middle name of Patterson – and a star was born.

From 1951 to 1957, Patsy recorded songs for Four Star Records, a subdivision of Decca Records, retaining the country sound she was comfortable with. In 1957, she would be encouraged to record “Walkin’ After Midnight” which would reach Number Two on the Billboard charts. Though Patsy had a number of successful songs after this, it would not be until 1961 that she would find major success again. Having signed with Decca Records Nashville, she recorded “I Fall to Pieces,” which reached the Number One spot and became the song most identify Patsy with.

Late June 1961, Patsy was involved in an automobile accident that almost killed her. She was in the car with her brother, Sam, when they were hit head-on, seriously injuring them both and killing the driver of the other car. Patsy would spend almost a month in the hospital recovering from her injuries. She was left with a scar across her forehead that she hid with wigs and make-up.

After her release from the hospital, she would record the song that would become her signature song.  “Crazy” was recorded in August 1961 while she was still on crutches and suffering with bruised ribs from the wreck. The success of the song would propel her through the remainder of 1961 and was followed by “She’s Got You.”

On March 3, 1963, Patsy gave her final performance, singing at the Dolier and Sailors Memorial Hall in Kansas City, Kansas. She was part of a tribute to “Cactus” Jack Call, a disc jockey who had been killed in a car wreck about a month earlier. Due to weather conditions, she was not able to fly out until March 5. Patsy boarded the Piper Commanche piloted by Randy Hughes. Also on board were two other country singers: Cowboy Copas and Hawkshaw Hawkins. They landed safely at Dyersburg Regional Airport (Tennessee) where Hughes had the plane refueled and checked on the weather conditions.

The decision to continue on the final leg of the trip was made and at six that evening, the plane lifted off the ground for the final time. Within minutes of the plane taking off, it crashed into the woods about five miles west of Camden, Tennessee. The official cause was pilot error – due to the weather, Hughes lost sight of the ground and the airplane’s wing clipped a tree. The position of the plane suggested that he saw it coming and attempted to pull the plane up, but it was unsuccessful and all four were killed instantly. Note: A number of places state that the plane she was traveling in crashed into a mountain, which is not the case. Due to visibility issues, the plane was flying too low to the ground and the cause was pilot error.

Pasty’s body was returned to Winchester, Virginia and was buried in the Shenandoah Memorial Park. Loretta Lynn and Dottie West would raise money to erect a bell tower at the cemetery that plays hymns in memory of Patsy at six each evening. In 1973, Patsy became the first female country singer to be inducted into the country music Hall of Fame.

I finished paying my respects as another car pulled in behind mine. We passed silently as they stopped to place the flowers they brought with them on her grave. They were still standing there as I left the cemetery, paying their respects to the fallen queen of country music.