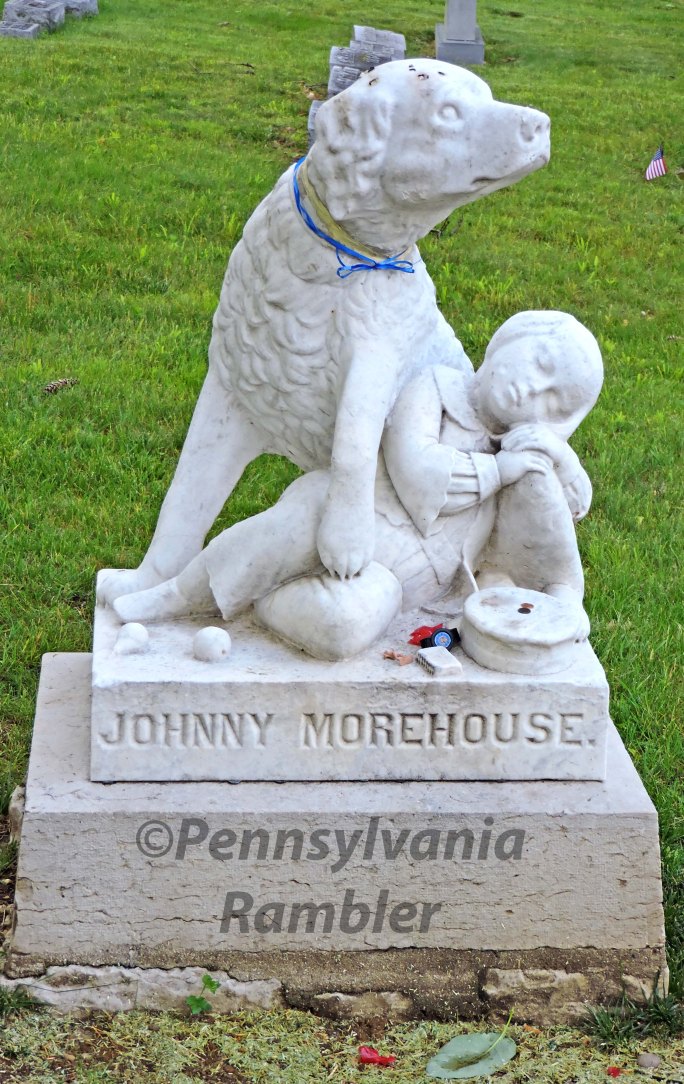 “Where are we headed to next?” Zech asked.

“Woodland Cemetery, Dayton,” I replied. The two of us had were eastbound after spending the weekend exploring eastern Indiana and western Ohio, but I knew we still had a couple stops before reaching our destination for the night.

“So whose grave are we looking for?” he asked as he pulled up information about the cemetery. “Erma Bombeck?  George Huffman?”

“It says he was the founder of the Huffy Bicycle Corporation,” Zech replied. “I know…the Wright Brothers!”

“I didn’t realize they were buried there,” I answered, though seeing they were from Dayton I should have realized they would be buried there. Obviously I had not done the needed research beforehand as Zech continued listing off the famous burials in Woodland Cemetery.

“So who are we exactly looking for?” Zech asked again. “I’m running out of famous people buried there.”

“Johnny Morehouse,” I replied. The sad story of Johnny Morehouse was one that I had read about many, many years ago and though I cannot remember where I read it, his story remained fresh in my mind. Of course being a dog lover, Johnny’s story was one that definitely captured and held my attention.

With our journey taking us through Dayton, I knew I had to make a detour to visit Johnny’s grave. But as I drove through the gates of Woodland Cemetery, I mumbled under my breath about finding one grave in the forest of stone monuments. In a wide spot just inside the gates, I parked and debated which direction I had to go to find Johnny’s grave.

Woodland Cemetery was founded in 1843 and would become one of the nation’s oldest “garden” cemeteries. By 1840, Dayton was rapidly growing and the grounds of the original cemetery which was located near the junctions of Third and Main Streets, was not going to be large enough. Under the direction of John VanCleve forty acres were selected outside of the town limits. Due to the variety of trees growing on the hills, the name of Woodland was selected for the cemetery.

I have to wonder if John VanCleve and the original board of trustees would have ever imagined that the cemetery would grow to over two hundred acres, have over three thousand trees, countless shrubs, and would eventually be the resting place of more than one hundred thousand graves. Interestingly I discovered that the highest point in the city of Dayton is Lookout Point, which is located on the grounds of Woodland Cemetery.

“Why are you stopping?” Zech asked as I sat there debating where to start on a nearly impossible task.

“Just thinking about where to start,” I answered mentally kicking myself for not doing enough research.

“You said it was a monument of a boy and his dog? It is the one right over there?” Zech asked as he pointed towards a spot to our right, just yards from the entrance to the cemetery. From where I had stopped, he was able to see the Johnny’s grave and a couple seconds later we were standing at one of the most visited memorials in Woodland Cemetery.

The monument that sits at the grave of Johnny Morehouse is one of a dog that stands watch over a young boy who is eternally sleeping. Around Johnny’s sleeping body is a harmonica, the boy’s cap, a top and a ball – all items that had been in Johnny’s pockets when he perished at a young age.

On August 14, 1860, as Johnny was playing near the Miami and Erie Canal, which existed along present-day Patterson Boulevard, he slipped and fell into the canal. Unable to swim Johnny struggled in the murky waters of the canal. Johnny’s loyal dog jumped into the waters of the canal in an attempt to save the boy. Some claim that both the dog and Johnny perished in the canal that day, but the most common version of the story states the dog was able to pull the boy from the waters it was too late to save Johnny. Note: Some modern accounts state that he fell into the canal and froze to death, but without a doubt, he did not freeze to death.

Johnny’s parents buried their son in the grounds of Woodland Cemetery. According to many, several days after the burial, the dog began to show up at Johnny’s grave. The dog would lay there, waiting for his young master. The dog, whose name has been lost to history, would be taken home, but within hours would reappear at the grave site. Visitors to the cemetery worried about the dog and would leave food and water for it. Soon the dog too passed away and legend states at it was buried next to Johnny’s grave. Note: While the lore is fascinating and I would like to believe this is what happened to Johnny’s dog, history doesn’t record what happened to the dog. One of the earliest versions I could find, which was still many years after Johnny’s death, merely states that one day the dog had disappeared. Whether it had died at Johnny’s grave or finally wandered off remains a mystery.

In 1861, a special stone was erected to commemorate Johnny and the devotion of his dog. The stone was created by local business man Daniel La Dow, a local business man. The front of the statue has “Johnny Morehouse” carved into it, while on one side are the words “Slumber Sweet.” It has become a common practice for people to leave little toys for the dog and trinkets for Johnny.

While we didn’t see Johnny or his dog, we did leave a couple trinkets on the stone for them.

Leaving Johnny’s resting place, Zech and I drove up the hill to look at some of the large stones that definitely caught our attention.

Note: There are a number of other ghost stories about the cemetery and while I’m not going to go full into them in this article, I want to note a couple things that Zech and I both noticed that may explain some of the stories about the cemetery being haunted. The first thing is that on two different times we had vehicles “sneak up” on us in the cemetery. With the sound of the traffic on the main roads and the rolling hills of the cemetery grounds, both cars seemed to appear out of nowhere before either of us realized that they were there. If a car can sneak up on us, there is little doubt that another person or animal easily could do likewise.

Another thing that we noticed involves a lady we saw jogging on the roadways of the cemetery. Zech had caught sight of her first and pointed her out as she jogged on another roadway near us. She appeared and disappeared behind the stones and at one point we lost her completely. I soon discovered that the road turned and a large monument hid her direction change. This could explain people seeing figures appearing and disappearing on the cemetery grounds.

A third factor that may explain some of the ghost stories is the number of trees in the cemetery. The light filtering in through the leaves causes a lot of shadow play, which could be responsible for some ghost stories.

Now I’m not saying that this accounts for all of the stories, but I believe these factors may have something to do with some of the ghost stories.

We left the cemetery, making one more stop at Johnny’s grave before we departed Woodland, to pay our final respects before leaving the dog to eternally stand guard over his boy in silence.